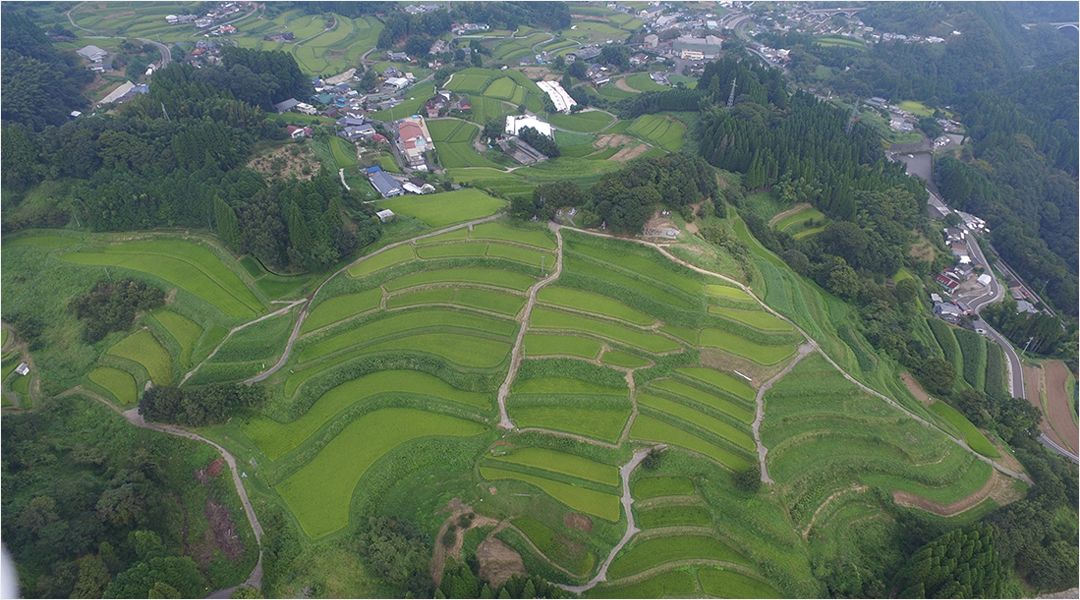 The terraced paddies of Takachihogo-Shiibayama Site is named as one of Japan's top 100 locations with terraced paddies. The paddies that spread out over 1,800 hectares of hilly terrain are lined up like stairs, displaying a variety of expressions throughout the year to grace the area with a tranquil, rustic allure.
The irrigation canals that are deftly arranged along the mountain's terrain make it possible to irrigate the paddies. The total length of the canals is 500 kilometers. 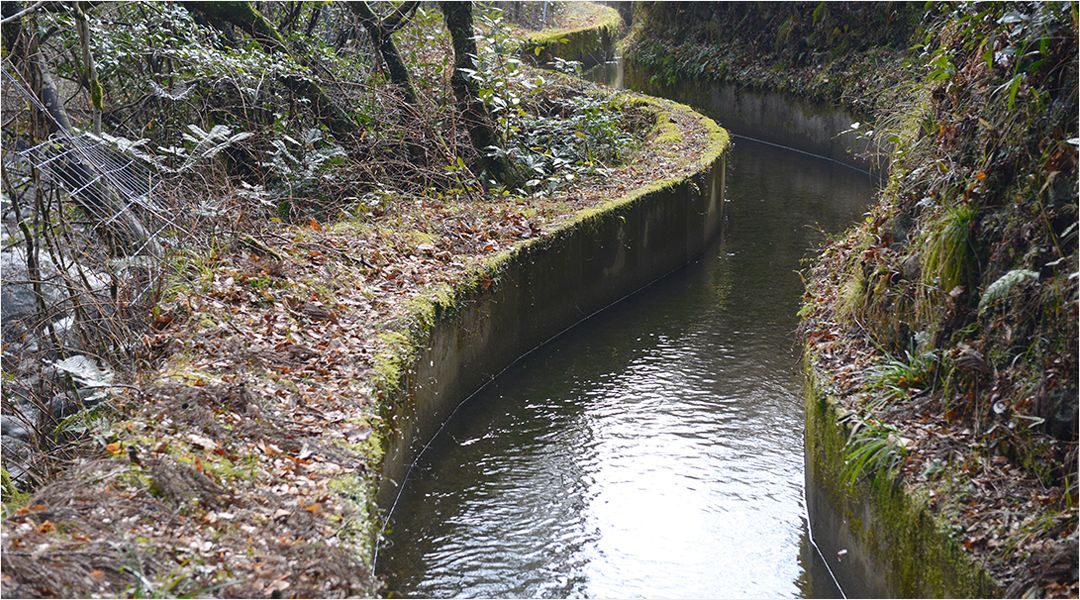 The story of the Iwakawa Irrigation Canal's inception

In the mid 1800s, it was not easy for the people living on sloped land at these high altitudes to secure water.
During droughts, the people would make cows carry buckets and walk 4 kilometers there and back to the Iwato River in the valley.
In an area where securing enough water just to get by was difficult, growing rice was nearly impossible.
The man who took a stand to change that difficult environment was a resident of the Mitai District, Mr. Tatsuya Fukushima, who was 44 at the time.

Around 1869, Mr. Fukushima proposed to the villagers the idea of building an irrigation canal that would draw water from upstream Iwato River.
Such a canal would free the residents from the troubles of not having enough water, and would thus allow for more paddies to be made.
However, most villagers did not agree to go with his idea.

Mr. Kohei Tazaki, director of Midori Net Takachiho, the organization that performs maintenance of the irrigation canals today, explains the reason for that.
"At the time, the residents of this area gathered most of the water they needed to get by from streams, and were met with much difficulty. But because of that, their appreciation for water and rice was extraordinary.
Yet, this was at a time when there was no equipment available for building such a canal. And on top of that, such a project would cost a large sum of money, so the people assumed that it just would not be possible to build such an irrigation canal across such a long distance. So Mr. Fukushima's proposal must have seemed unrealistic to the residents at the time." 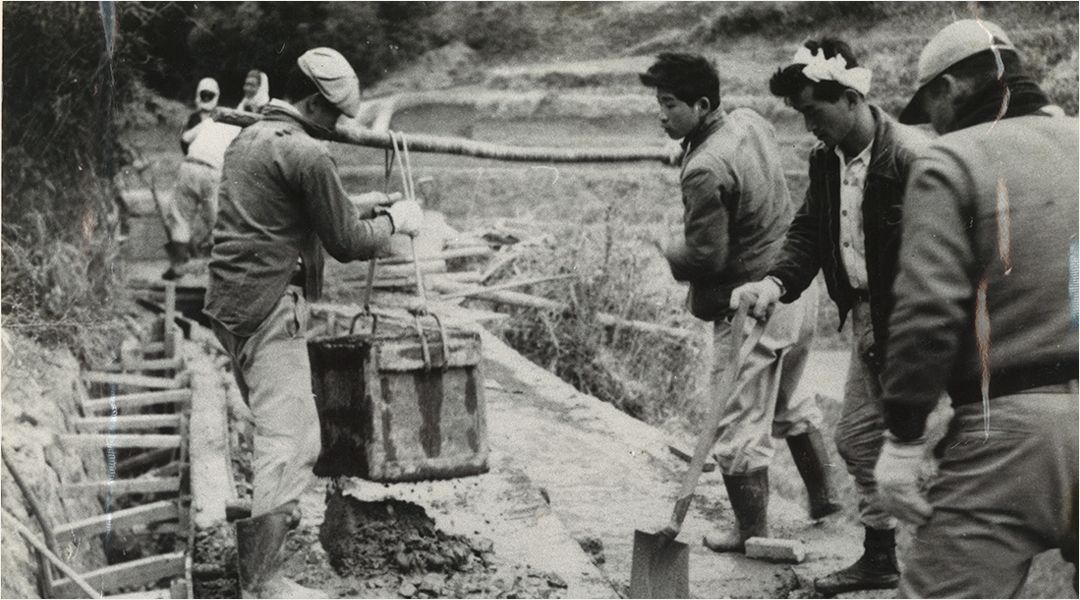 Water brought about by the hard work of ancestors

Although faced with the difficult situation of not being able to win the support of fellow villagers, Fukushima decided to gather the necessary manpower and funds himself to carry out the building of the irrigation canal as he was certain that its construction would vitalize the area.
After over ten years of convincing, he was able to round up a team of 83 villagers who agreed to build the canal with him.

In 1879, the group gathered the money for the plan by putting up the farming land of all members as collateral.
From that point, the group spent eight years preparing for the big plan. When Fukushima was 62 years old, construction work finally began.

However, cutting through rocks, digging tunnels, and securing a water source in mountain terrain proved to be most difficult.
The group had meetings at Fukushima's home. He would serve the members food and encourage them while personally taking command of the construction efforts, working without rest.

After nine years of grueling hard work and an exorbitant sum of personal money spent, the 17-km long Iwakawa Irrigation Canal was finally completed.
And when water began flowing through it, it completely changed the lives of the local residents.
"Before it was built," Mr. Tazaki explains, "there were only about 7,900 square meters of paddies just around the stream, but it is said that the irrigation canal boosted that area 150-fold."
Even the people who were initially opposed to the idea all thanked Mr. Fukushima.

Mr. Fukushima passed away from natural causes at the age of 87 in 1910. The following year, he was posthumously awarded the Medal of Honor with Blue Ribbon by the Japanese government for his outstanding achievements. 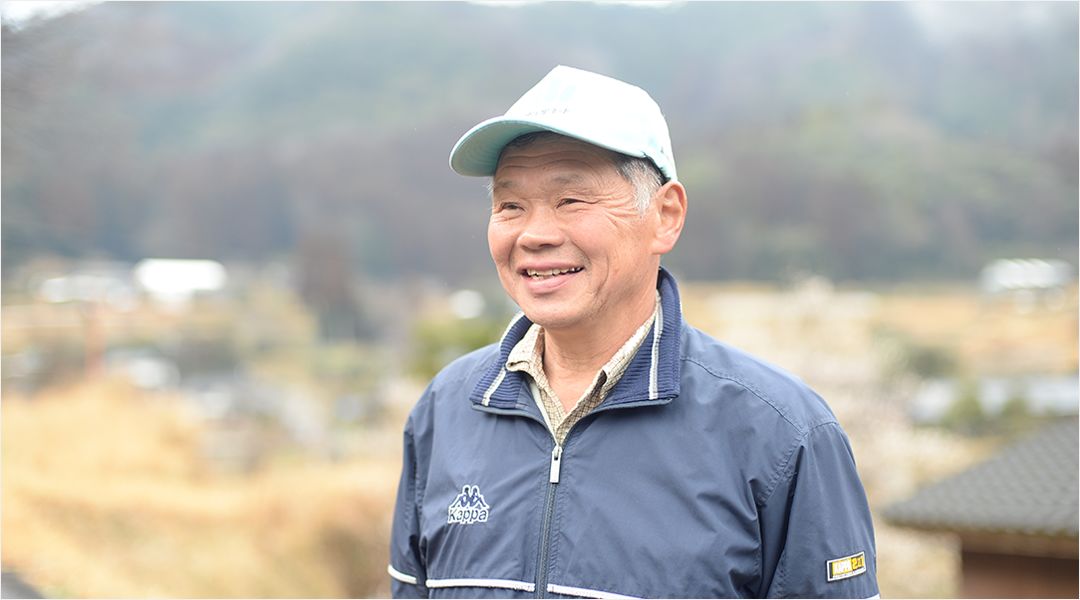 The legacy lives on

It took another 40 years for all of the irrigation canals present today to be built. Since then, the canals have been reinforced with concrete.
Currently, members of Midori Net Takachiho and local residents work together to maintain the canals.
"We split the irrigation canals into seven zones, and each group conducts maintenance on their zone. We clean out the mud before the demand for water peaks in April, and we also cut the vegetation three times a year.
When there is heavy rain or strong winds, we go around checking them. We adjust the floodgates, remove debris from the canals, and prevent them from flooding."
As some tunnels are simply rocks with holes cut through them, or as there are very steep spots and places where there is hardly any footing, going around and performing maintenance is a very tough job. However, it is an essential one to protect the irrigation canals from taking damage from natural conditions.

"Our ancestors went through unimaginable hardship to build these canals.
These canals have been maintained and handed down from one generation to the next, and they continue to support life in this area, even today."
"So it is our wish to do the same and hand down these canals to the next generation in the best condition possible." 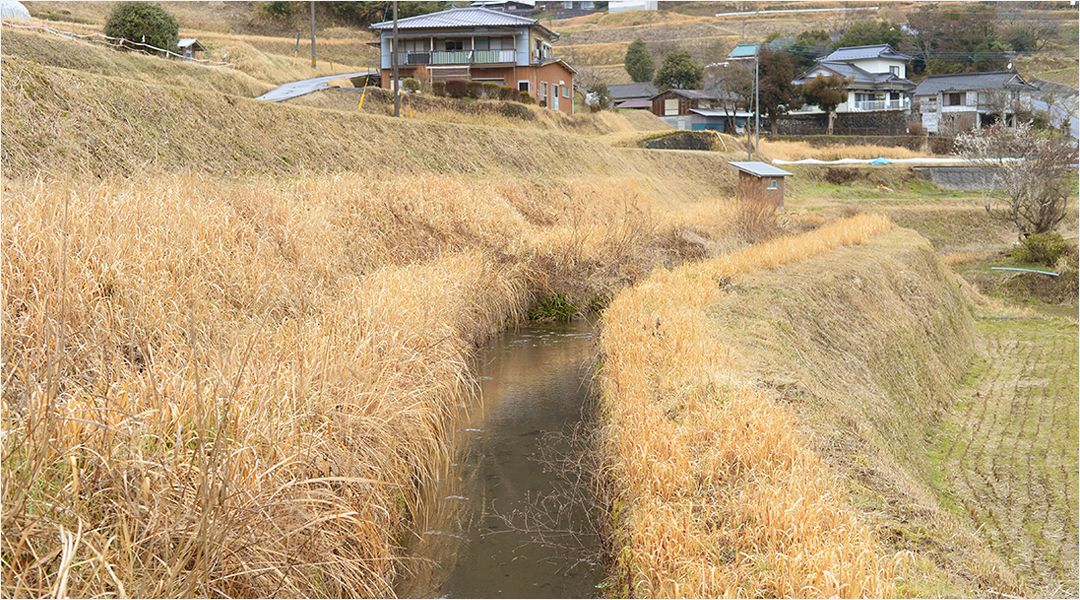 Rich water as a learning environment

Since these irrigation canals have been preserved with utmost care, the water flowing in them is unbelievably clear. As such, it is home to a great number of organisms.
That's why when conducting repairs, some of the vegetation is left as they are in order to make it easier for small fish and other organisms to survive.
"We once had the local elementary school kids come here. We had them actually try catching a fish called yamame with their hands, and also cook it.
The kids seemed excited to experience such new things.
I hope that we can work in a number of different ways to ensure that these irrigation canals serve as a place of comfort and joy for the next generation as well."