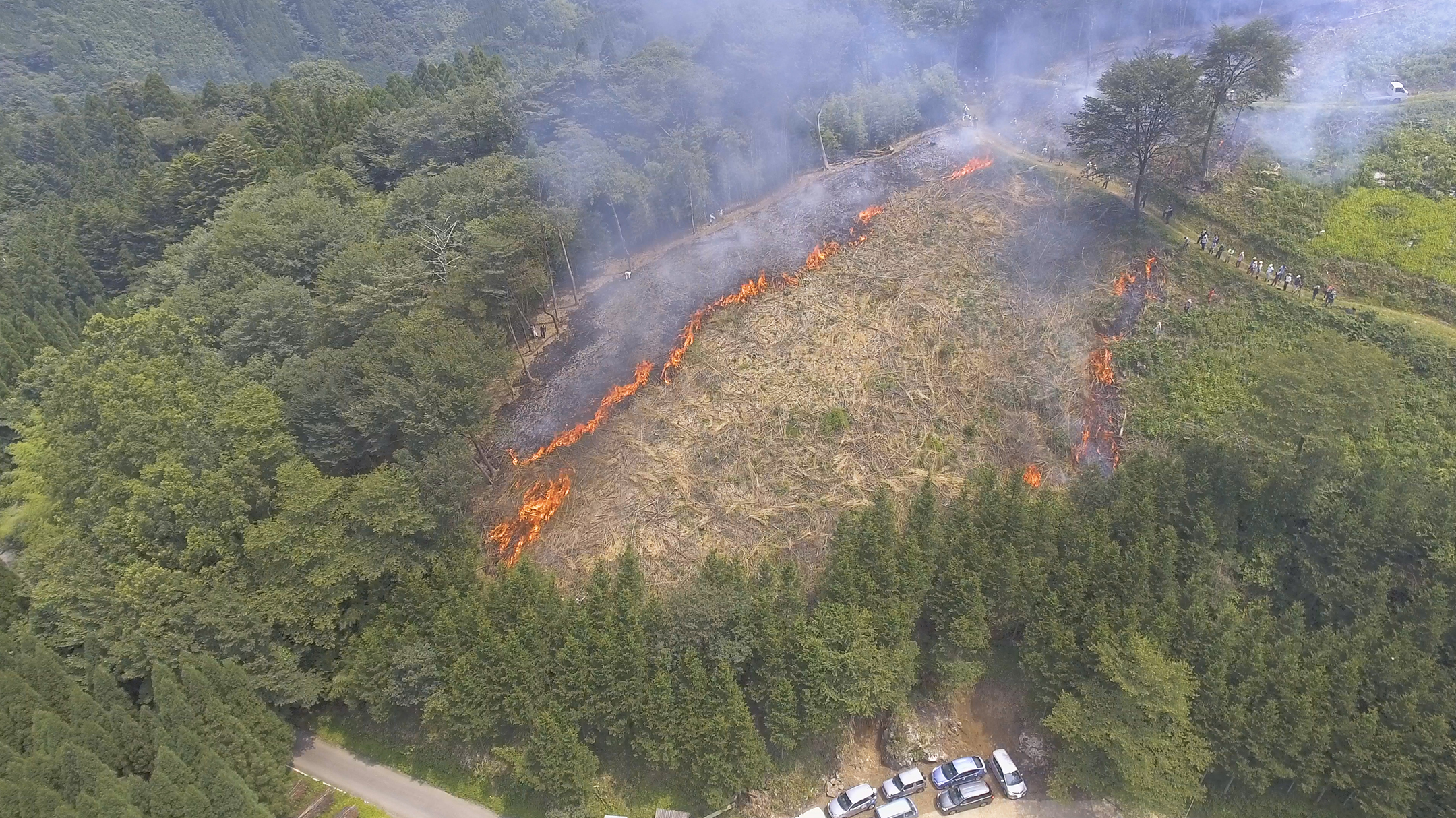 The field burning of Shiiba Village is one of the systems that has been recognized as a Globally Important Agricultural Heritage System (GIAHS).
Field burning is carried out in mountainous areas of Southeast Asia, but the traditional field burning of Japan differs in many different aspects. For one, smaller areas are burned in patches, and the crops are rotated after a cultivation period of three to four years. The fields are also given a long fallow period to restore the forest.
Burning the fields in small patches minimizes the effects on the surrounding plants and wildlife, and helps conserve the lush forests.

The fact that this method creates a balanced relationship between forests and agriculture, and still thrives today has garnered acclaim from around the globe, thus being registered as a GIAHS.
The roots of Japan's field burning can be traced back to the extensive agriculture of the Jomon Period from over 2,000 years ago. The practice was carried out across Japan until about 1950, but quickly died out for a variety of reasons. Field burning became replaced by rice cultivation and the post-WWII forest expansion plans gave way to sugi and hinoki trees. Currently, Shiiba Village is the only place in Japan that still carries out field burning. 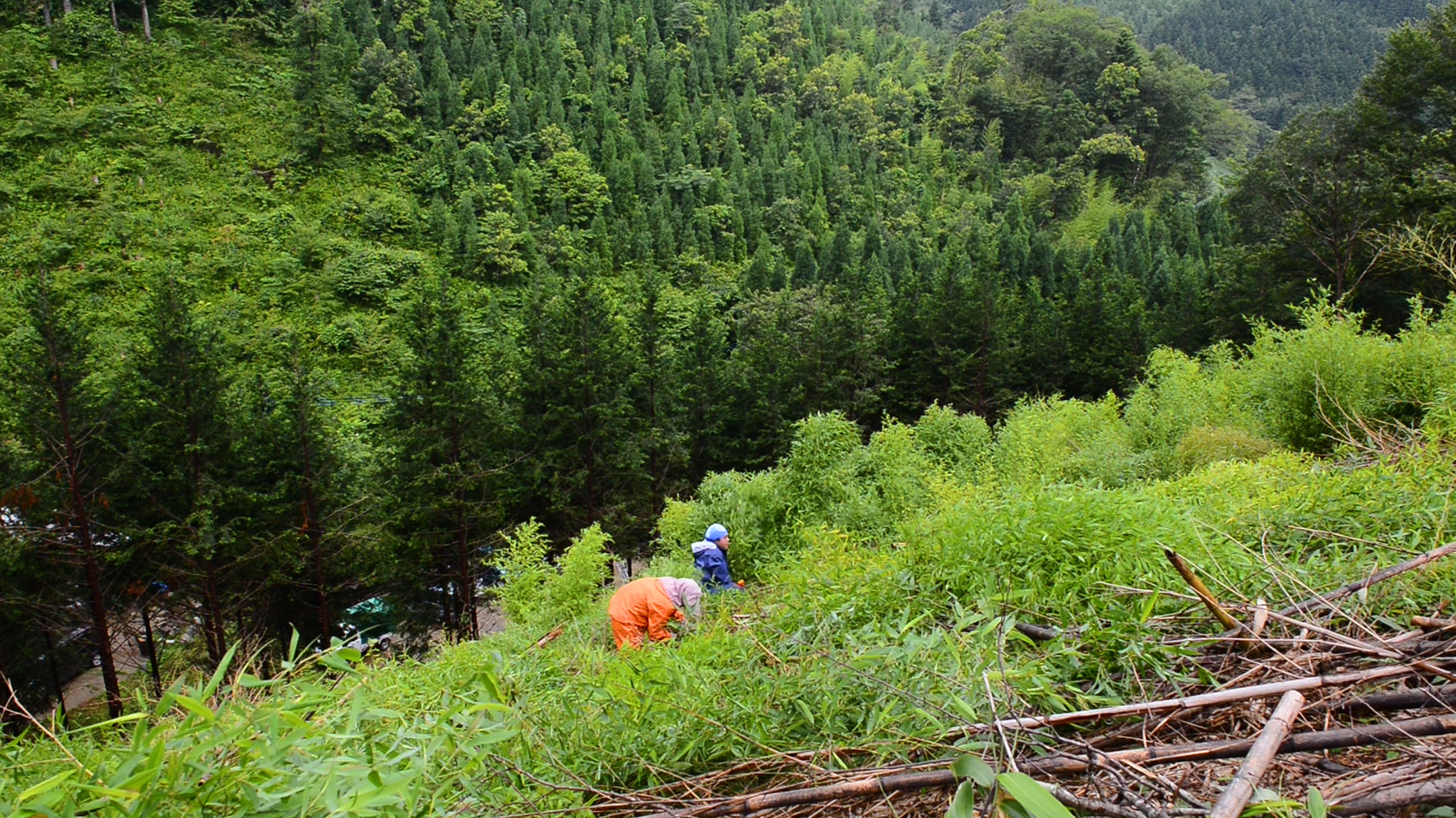 Field burning took place this year as well, at an altitude of 900 meters in the Omukai District of Shiiba Village, Miyazaki Prefecture.
Before the field burning, the trees on the mountain were cut down and the grass and bamboo trimmed.
Early August, the burning begins. Dead grass and bamboo are gathered at the center to prevent the fire from spreading. 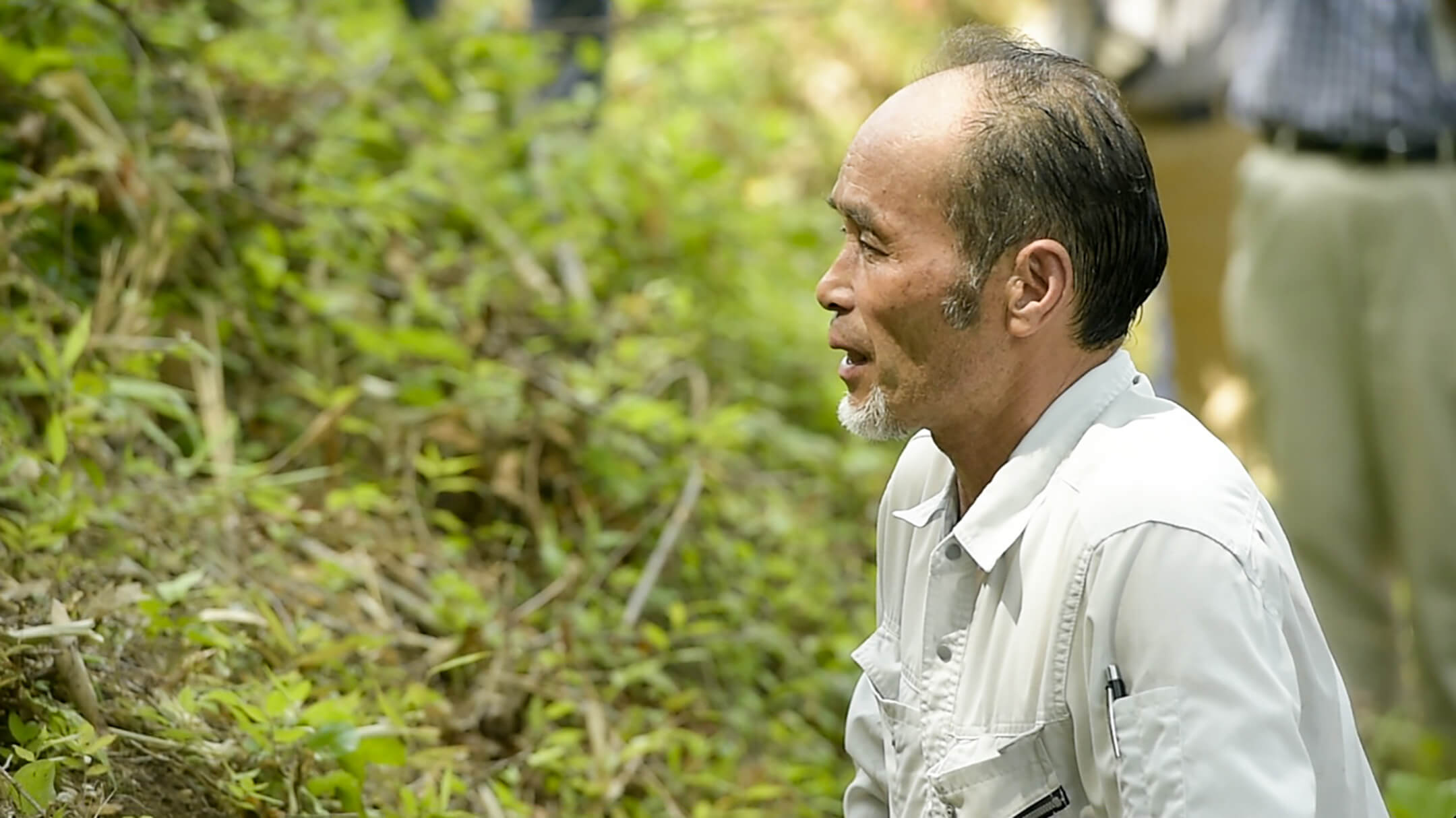 The burning process starts with a chant

Masaru Shiiba carries out field burning in Shiiba Village every year. After the dead plants are lined up to prevent the fire from burning, he solemnly offers sacred sake to the Mountain God and recites the following words.

"We will be setting fire to this place.
Snakes, frogs, insects, run away.
Mountain God, Fire God, protect us so that everything burns properly and there is no damage."

After a short pause, he slowly stands up, claps twice, and bows. It is now time to light the fire. 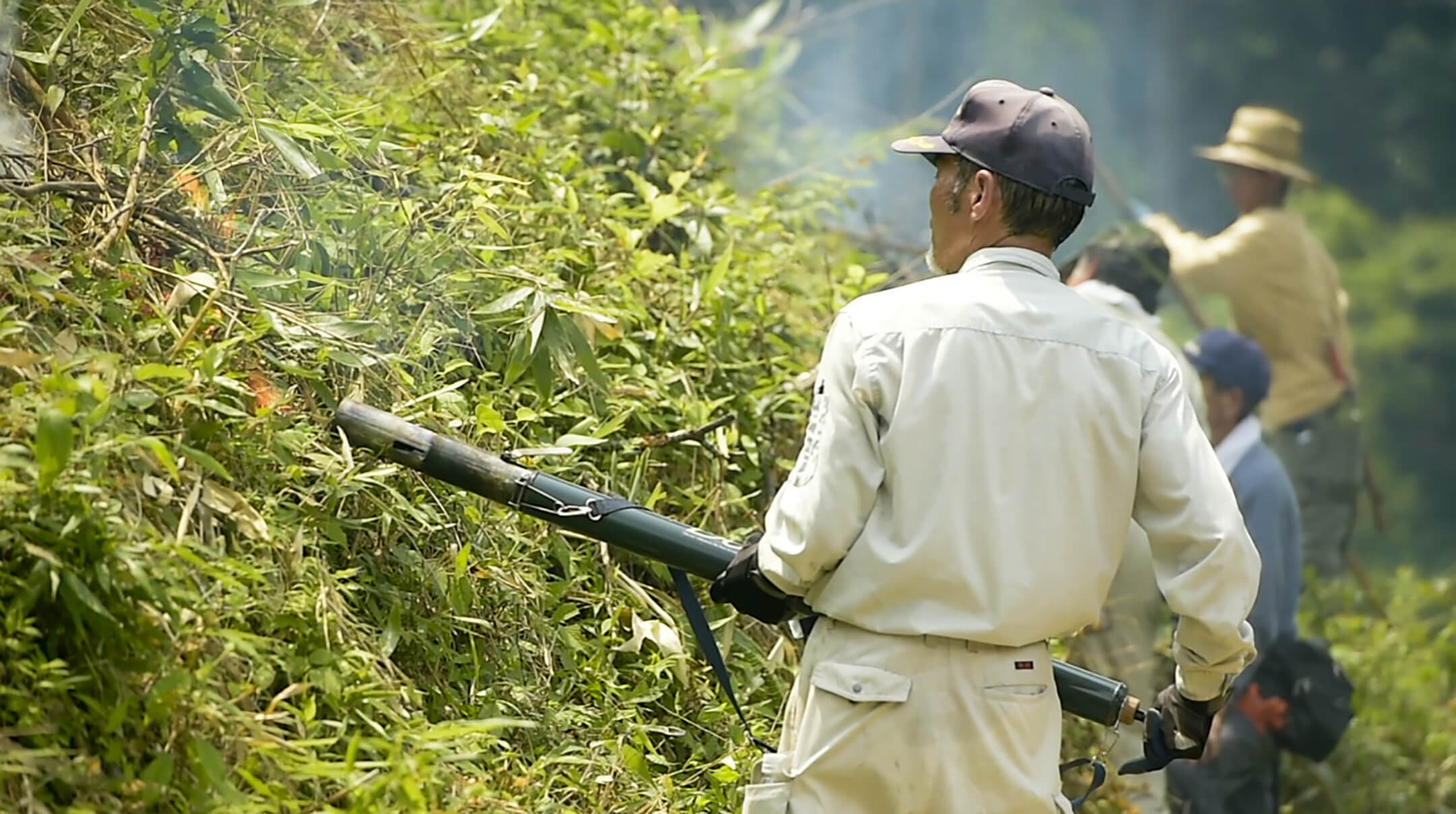 First, gas burners and bamboo are used to start lighting the fire from the top of the slope. 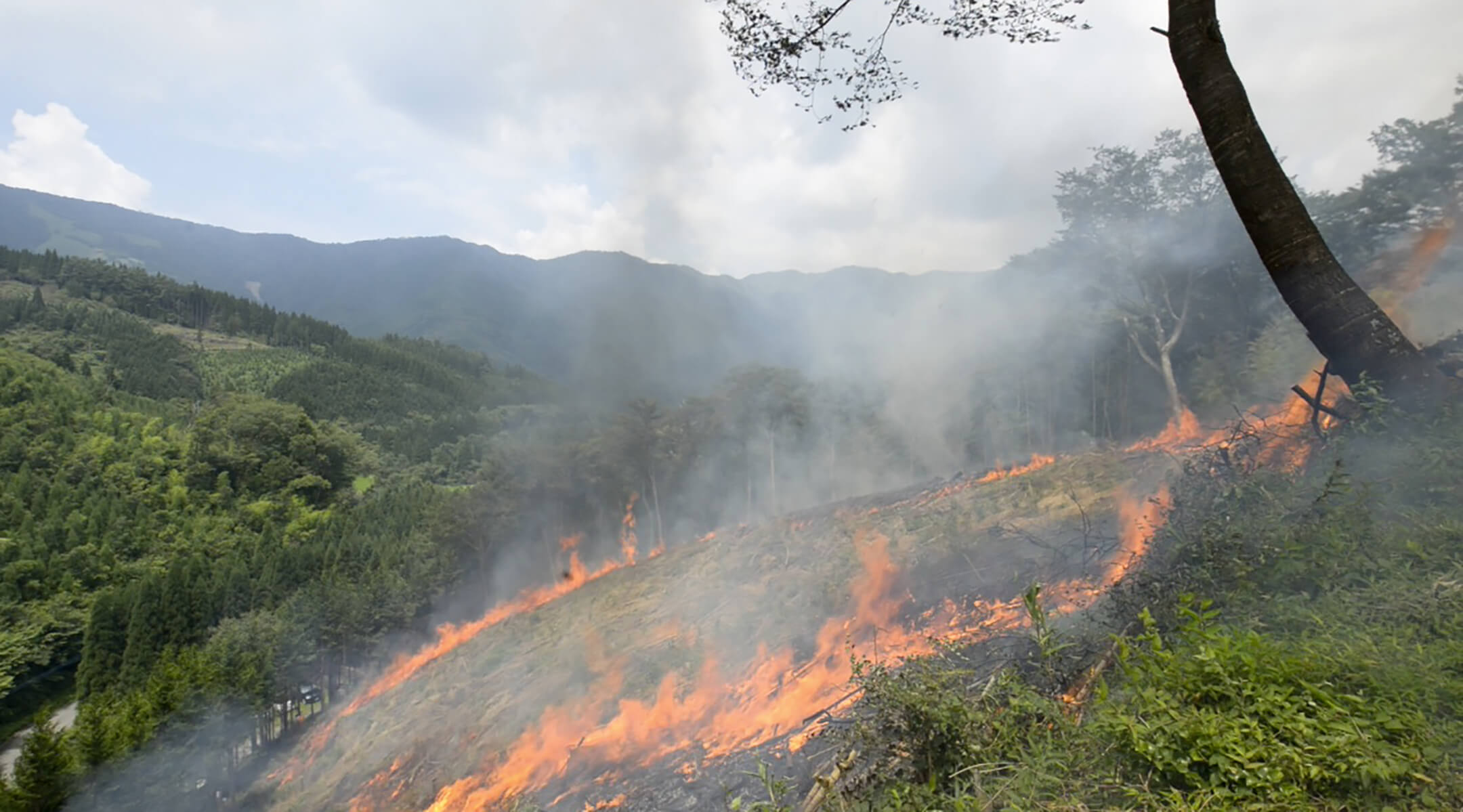 An ecosystem created by cyclical farming

Field burning is a long-standing tradition of Shiiba Village. Small areas of the forest are cut down, the wood carried out, and the undergrowth burned to create arable land.
In the first year, they plant buckwheat, said to sprout after 75 days. Millets are planted in the second year, adzuki beans in the third year, and soybeans in the fourth.
Then, the field is given a fallow period of about 30 years to let the forest recover before the fields are burned again to start over the cycle. 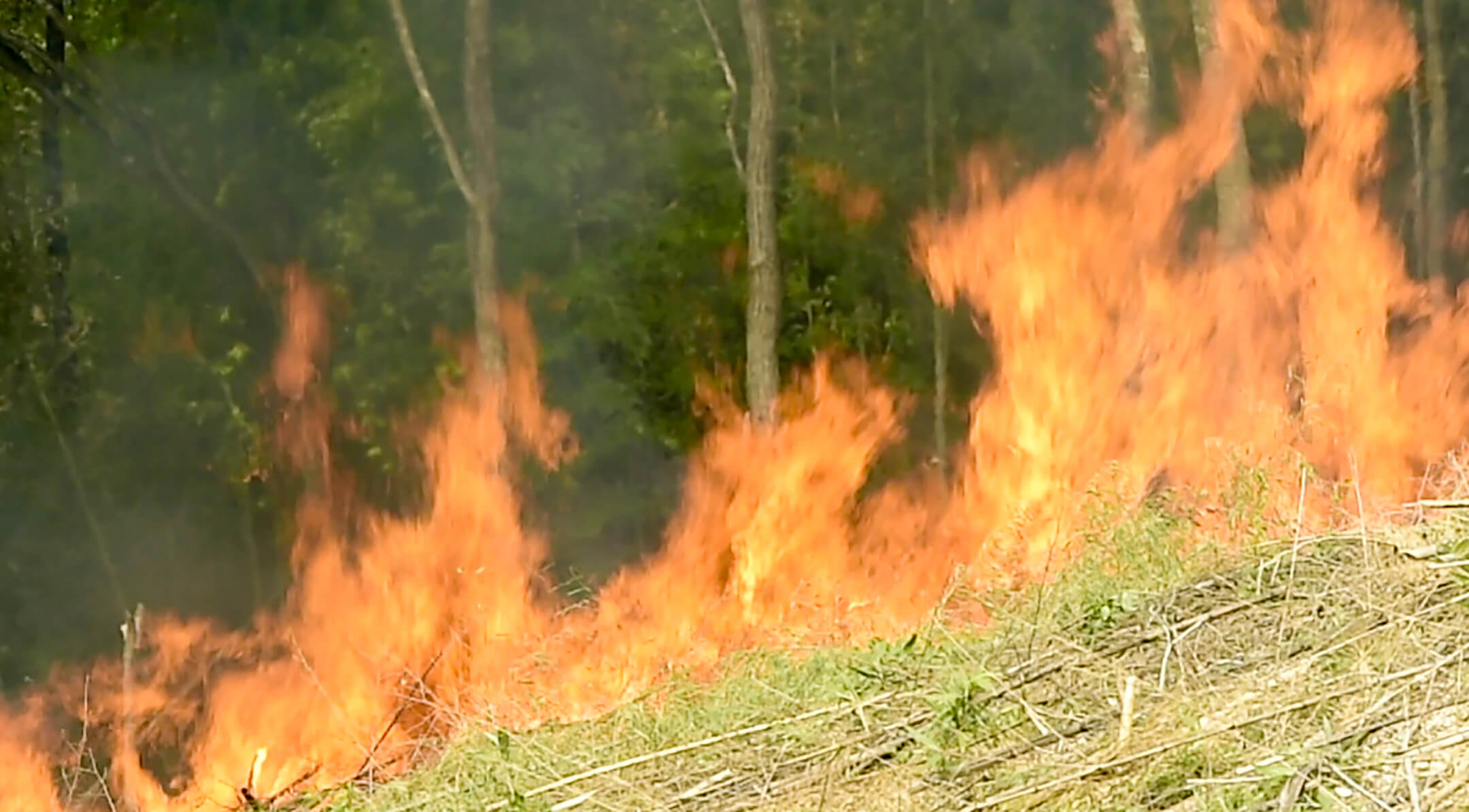 As dead leaves burn, smoke rises and sparks fly.
The area is engulfed with hot air as the fire rages on.
The fire moves toward the center of the field and burns everything to a black crisp. 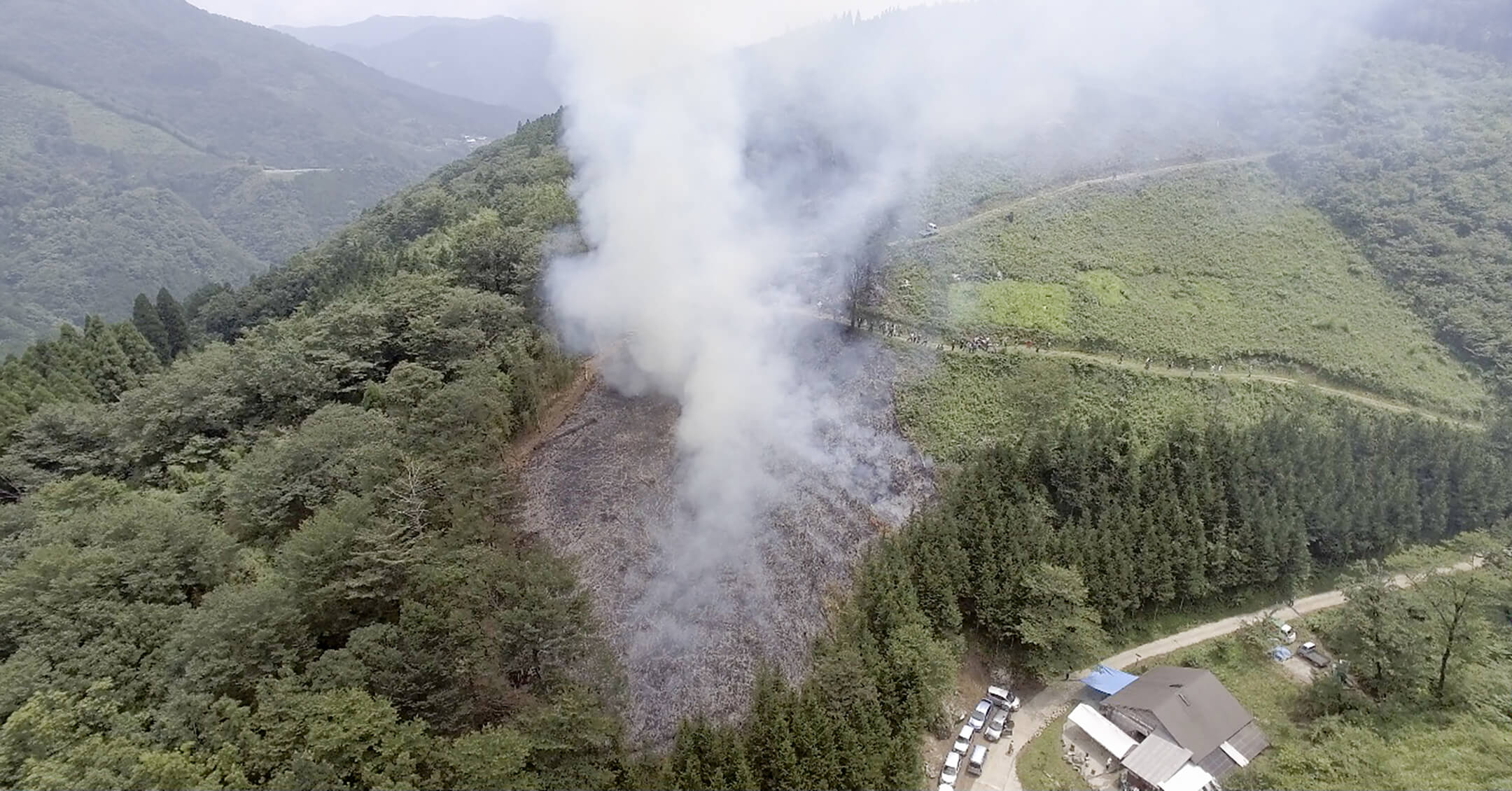 After extinguishing the fire, buckwheat seeds are planted

As the burning comes to an end, a strong updraft occurs.
Small whirls of flames and ashes start to appear.
And finally, smoke rises like a tornado and the fire dies out.
Shortly after, buckwheat seeds are quickly planted in the ash-covered field.

Bamboo leaves are used to brush the ground and mix the ashes and seeds.
All the ash that flew up in the air is eventually washed away by rain.

It turns to be an ideal session, as it is the first time in a few years that they had rain after the burning. 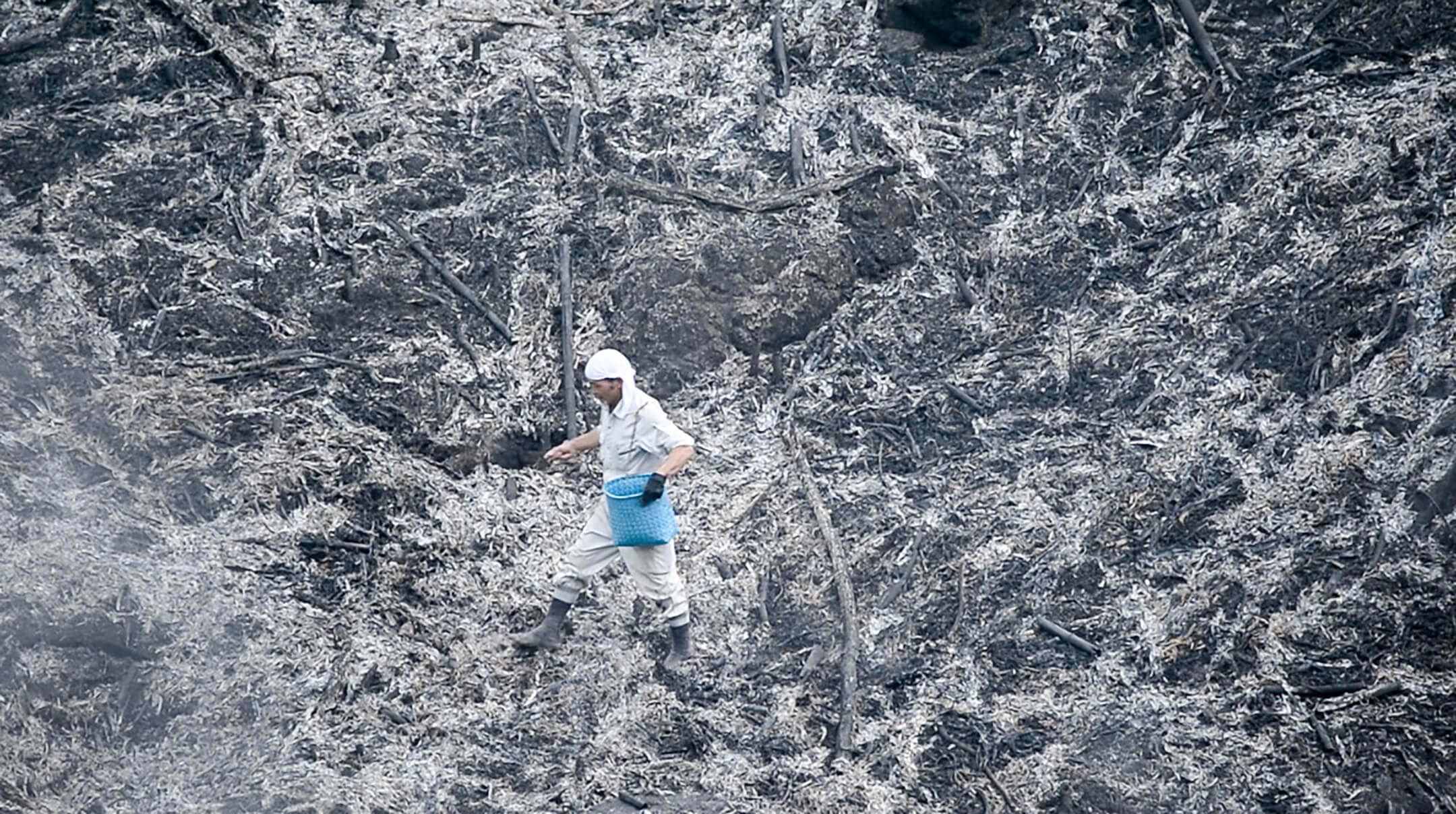 The cycle of human-nature coexistence

We spoke with Mr. Masaru Shiiba, who carries out field burnings in Shiiba Village.
"The field I'm burning now is one that we haven't burned since my father was working.

For the first two years after we burn the field, we can grow 100% pesticide-free crops because boars and insects stay away from the burnt smell. But in its third and fourth years, weeds start to grow, and that attracts insects. The mountain becomes strong and rejuvenated, and so we move to a different spot.

We burn the mountain, use the land, and the mountain returns to its former state. Then we move to a different spot and burn it again. It's a never-ending cycle of humans and nature existing in harmony." 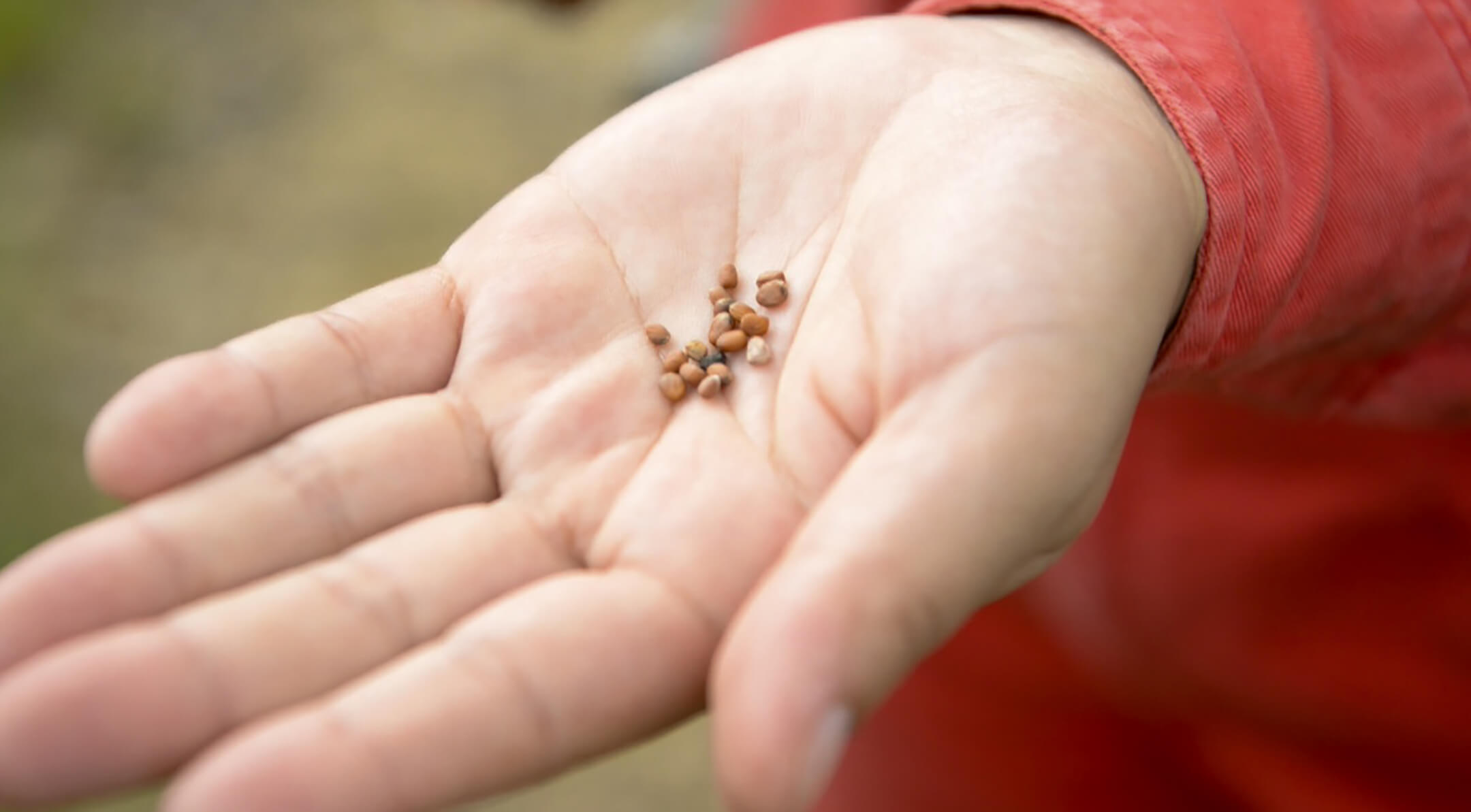 "Field burning allows for forests to regenerate as well. There might be about 50 kinds of plants at first, but after burning, 300 kinds of plants can grow. A specialist once told me that the burning wakes up seeds that were asleep in the soil. That's how places that are burned slowly grow back to their original state.

Along with the plants that grow naturally, we plant chestnuts, sakura, maple, and mizunara trees, which animals feed on. And in 10, 20 years, the plants will bear lots of fruit that attract animals like boar and deer."

Mr. Shiiba says that this prevents boar and deer from coming into town looking for food, as they can happily return to their original habitat. 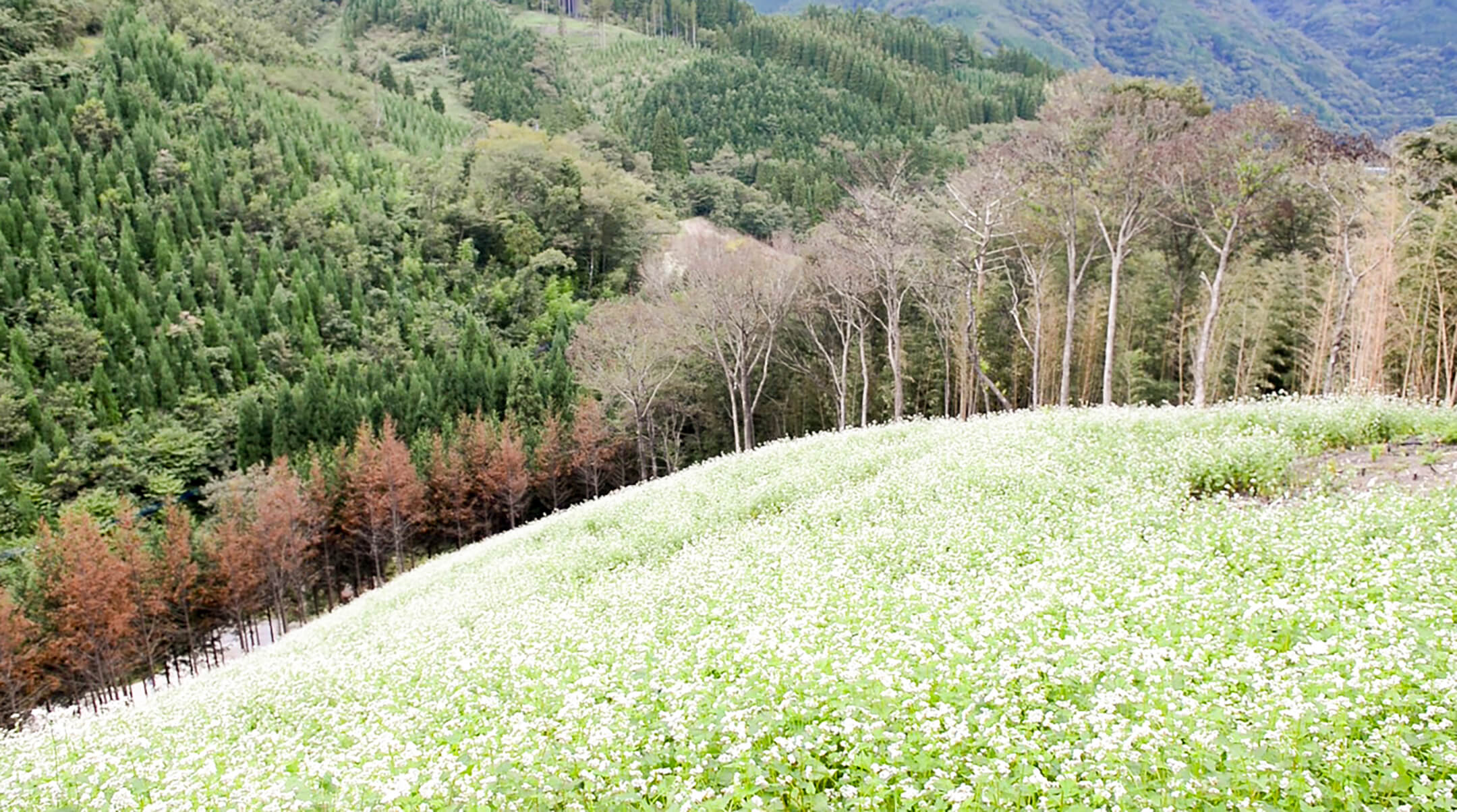 "The task at hand now is finding successors. A local elementary school has been giving hands-on field burning lessons for nearly 30 years. This is important as the technique will die out if young people don't inherit tradition."

Perhaps the new GIAHS status will bring attention and opportunities to Shiiba Village, and one day, smoke from field burning will rise throughout.
That is Masaru Shiiba's wish.